In 2002, the Yoplait Whips! lineup was reformulated with a "light & fluffy" texture. The cup was even redesigned, changing the font for "Whips!" to script. 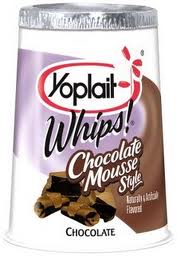 The "Whips!" script was facelifted, and "Chocolate Mousse Style" was added for a caption.

In 2012, all Yoplait cups were redesigned the same way.

In 2015, the "Whips!" name reverted back script, while the other flavor lineup names remain in print.

To show off their heritage, Yoplait redesigned all their cups, making them look like the cups from when they first started. This redesign also brings back the Yoplait name from the 1985 logo.

In 2017, Yoplait added a limited-time flavor in this lineup, Sea Salt and Chocolate, along with three other flavors (two in the Original lineup and one in the Light lineup).

Retrieved from "https://packagingpedia.fandom.com/wiki/Yoplait_Whips!_(Chocolate)?oldid=6005"
Community content is available under CC-BY-SA unless otherwise noted.