Twizzlers Bites are miniature sized versions of Twizzlers, manufactured by The Hershey Company. They were introduced in May 2013 along with Jolly Rancher Bites, both brands have the bites in resealable bags.

It aired on May 2013, just about when the brand released. It's about when the bites cause war on their cavalry allies Jolly Rancher Bites, as the announcer says "New Jolly Rancher and Twizzlers Bites are so soft, chewy and filled with their fruity selves, they think this world is big enough for the both of them. But we assure you, it is." 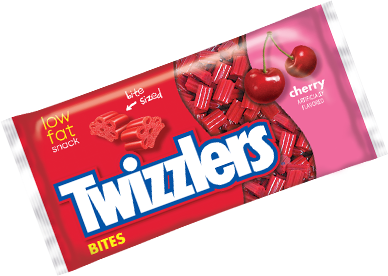 Retrieved from "https://packagingpedia.fandom.com/wiki/Twizzlers_Bites?oldid=5397"
Community content is available under CC-BY-SA unless otherwise noted.