Reese's Fast Break (or Hershey's Sidekick in Canada) is a chocolate bar produced by The Hershey Company. The bar consists of peanut butter and a layer of nougats with a milk chocolate coating. Due to the bar's shape, it resembles Drake's Funny Bones, a non-Hershey product, which those include just chocolate and peanut butter, and almost tastes like Funny Bones.

The bar was introduced between November/December 2001 and 2003, and did not air one commercial for the bar at the time.

There are some differences with the bar in the wrapper than in reality. In the wrapper, the bar pictured has chocolate creme on top of the peanut butter part, and it's attaching the nougat part. In reality, the bar has peanut butter and nougat as the filling. 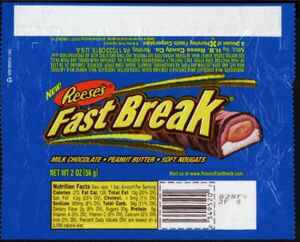 Same as before, except:

This is a list of copyrights seen on the back of every Reese's Fast Break wrapper.

Retrieved from "https://packagingpedia.fandom.com/wiki/Reese%27s_Fast_Break?oldid=6482"
Community content is available under CC-BY-SA unless otherwise noted.