packaging pedia
Register
Don't have an account?
Sign In
Advertisement
in: Candy, Reese's, The Hershey Company,
and 2 more

Reese's Bites was a product of Hershey Foods Corporation (later renamed The Hershey Company in 2005) as part of HFC's Bites lineup. This product, and the entire Bites lineup were all discontinued due to a choking hazard. In 2004, a successor of this product called Reese's Swoops, chocolate covered Pringles with peanut butter icing on top, replaced the Bites version. The Swoops version was discontinued in 2006. In 2012, a brand new Reese's product, an unwrapped version of Reese's Miniatures nicknamed Reese's Minis, replaced the Swoops version as that version's successor. In 2013, the word "Bites" was brought back to only be used on Twizzlers Bites and Jolly Rancher Bites. 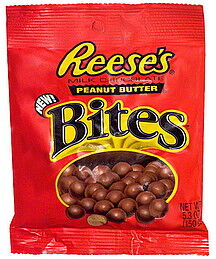