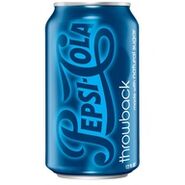 Pepsi Throwback first bottle design.
Add a photo to this gallery
This can uses the navy blue background from that of regular Pepsi; at center is the Pepsi-Cola logo from the 1950s with the word "Throwback" in the typeface used on the Pepsi name. The logo is repeated twice, while near the nutrition facts is the 2009 Pepsi logo.

Redesigned Pepsi Throwback Bottle.
Add a photo to this gallery
To make it look more nostalgic, the label changed to a modern-aged version of the Pepsi label from the 1970s. On the red rectangle is a yellow label with the word "Throwback, Made With Real Sugar."

In 2014, Throwback was discontinued and got its name changed to Pepsi-Cola Made with Real Sugar. In the product's first year, two other flavors, Wild Cherry and Vanilla, were released as part of a summer promotion.

Retrieved from "https://packagingpedia.fandom.com/wiki/Pepsi_Throwback?oldid=6473"
Community content is available under CC-BY-SA unless otherwise noted.