Lucky Charms is a mixed toasted oat and marshmallow cereal by General Mills, introduced in 1964. The cereal's mascot is Lucky the Leprechaun, or simply Lucky, whose litany has eight charms that represent the cereal's marshmallows. In 1991, Lucky Charms made its Nestle debut (in 1989 General Mills and Nestle merged forming Cereal Partners Worldwide) in the UK, France and Italy. Between 2003 and 2015, the kids that catch Lucky are Agnes, Manny and Corwin.

Though this is the first package, the bowl of the cereal is shown.

Lucky made his first appearance on boxes in 1965.

The Lucky Charms logo is redesigned, and Lucky is jumping in the air and raising his spoon.

Same as before, only Lucky is revised this time.

Lucky is sitting on the cereal name, aligned left. Near him is a rainbow coming out of the cereal bowl and displaying the marshmallows on it.

Red balloon marshmallows were added in 1989.

1992 saw the launch of the blue/yellow/red rainbow marshmallow.

Lucky is stroking a rainbow out of his hand which lands into the cereal.

A rainbow shoots down the Lucky Charms logo and into the bowl, with Lucky is smiling to the audience aside from it.

In 1999, the special-edition man in the moon package showed Lucky as an astronaut.

The Lucky Charms name is jazzed up, with the "y" leaving a rainbow trail. Lucky makes an arched rainbow displaying all eight of his magical charms.

General Mills got their logo changed one month after the package was redesigned.

At the time of the box design's first appearance, Lucky Charms promoted marshmallows that were increased in size. After 2004, the "They're Magically Delicious!" slogan replaced the Bigger Marshmallows caption.

Between these years, no standard package was introduced.

June 2008 saw the release of the hourglass charm. In October, Lucky was chased by a dinosaur.

To accompany the cereal's campaign theme of the shooting star marshmallow, Lucky is shown riding on a shooting star with a caption saying "Lucky Flies Far With His Shooting Star"

Lucky is facing down at the cereal. He has his right hand out and makes a rainbow turn into milk, with all eight charms on the rainbow trail. Accompanying him is the slogan, "They're Magically Delicious!"

In 2013, a St, Patrick's Day edition which included green shamrocks as marshmallows portrayed a green background with Lucky jumping in the air. This special edition variety, along with its box design, returned in 2014 to commemorate the cereal's 50th anniversary.

Lucky is joyfully making an arched rainbow, displaying his eight magical charms, and facing upward at the cereal logo. This box design is similar to the one from 2003.

On special variety packages, Lucky was badly redesigned and photoshopped. This design of him appear on as follows: 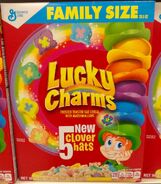 Add a photo to this gallery

Lucky, still making an arched rainbow displaying his eight charms, is now redesigned, joyfully facing the audience and jumping in the air. The cereal logo is redesigned as well.

The design of Lucky on the package is reverted back to the one from 2014, only facelifted. Once again, he is making an arched rainbow which is displaying his eight magical charms and looks upward at the cereal's logo.

The standard box first appeared on General Mills' "Good Stars With G" commercial in June 2017. At this time, the cereal promoted three new rainbows, whose package shows Lucky riding on three different tri-colored rainbows that inspired the actual marshmallows. He is smiling at the audience and raising three fingers up.

As part of General Mills' Rube Goldberg Machine Cut-Out promotion in January 2018, Lucky faced upward at a Rube Goldberg-inspired contraption releasing his marshmallow charms. This was the last promotional Lucky Charms package to feature the hourglass.

The hourglass charm was discontinued and got replaced with a unicorn head charm. The package featured a rainbow extending out of the bowl with a purple/blue-haired unicorn standing next to it and Lucky using his magic to show off the marshmallow.

Retrieved from "https://packagingpedia.fandom.com/wiki/Lucky_Charms?oldid=5965"
Community content is available under CC-BY-SA unless otherwise noted.