An early Cinnamon Toast Crunch box with a T-shirt offer. 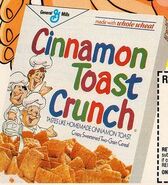 First box design of the cereal. The CTC logo was in a marker writing font and colored in purple, green, blue, and red. These would later become the CTC logo's trademark colors.

When the cereal was first introduced, the mascots were a slice of bread that looks similar to the current mascots as of Summer 2019 and a salt shaker, but were later replaced by three bakers, named Wendell, Bob and Quello.

During this box design's later years, the cereal name was indented right. General Mills changed their logo in 1989, slightly redesigning the cursive "G" and replacing the white triangle. 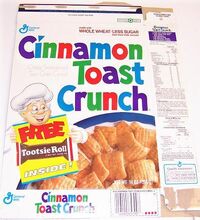 In 1991, Bob and Quello were retired from the box and TV commercials, leaving only Wendell as the mascot.

The CTC name was also re-written in bold letters. 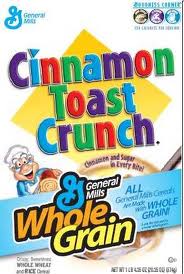 The CTC logo's typeface changed to one similar to Futura Bold Condensed, and added a yellow square behind it. Wendell now holds a giant piece of cinnamon.

Right when this box design was introduced, French Toast Crunch became the first new variety in the Toast Crunch lineup.

In 2003, General Mills' cursive "G" logo reverted back to the one they had until the late 1980s, and Wendell held a piece of the cereal. 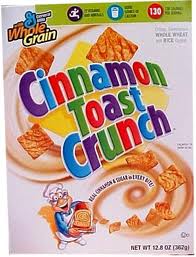 This marks the first time a CGI logo is featured. The CTC name is now curved, and the yellow square has a glossy look. New to the box are a cinnamon-scent vortex sending pieces of the cereal flying through Wendell's cinnamon swirl bread. Wendell's design is the same from the previous box art.

At the same time, French Toast Crunch, the companion cereal, got redesigned too, but ended up being discontinued.

In 2009, Wendell was retired from the TV commercials in the favor of the more fitting mascots for the cereal, The Crazy Squares.

This redesign also saw the launch of Chocolate Toast Crunch, with The Crazy Squares colored brown to represent the chocolate flavor.

Late in 2014, the General Mills logo reverted back to a white triangle.

French Toast Crunch was brought back by popular demand as well, using the original 1995 box design.

A Crazy Square is dropped, the other square looks down at the cereal, and the CTC typeface was changed, looking strikingly similar to the 1995 logo.

General Mills reveals a advertising branding redesign to reflect the first box art back in 1984.

Same As Before, Except:

Revealed on Facebook, the box art was launched in June 2019.